The book, Ancient Celtic New Zealand, featured an official archival document, which clearly showed an intention, by New Zealand Government Departments, to withhold archaeological information from the public for a period of 75 years.
Since publication of the book, many indignant people have written to the National Archives for an explanation as to why such an embargo had been put in place. They have questioned the legality of such imposed restrictions and have contacted their Members of Parliament to force a release of any information still being withheld.
This author and others, simply wish to inform the public that, in New Zealand, archaeological information, artefacts and skeletal evidence can be deemed secret, with knowledge deliberately withheld in the perceived interests of government policy.
Whether or not the fullness of embargoed information from the Waipoua Forest Archaeological dig has finally found its way to the public, is now considered irrelevant. What is important to realise is that certain information, which could rewrite regional history overnight, will continue to be withheld if officials are not caught out and forced to release at least a % of the material.

Various contradictory letters of explanation have issued forth over time from the official organs, assuring the public that the "Waipoua" fiasco was all just a big misunderstanding, that there never was any embargo and all documents related to the Waipoua Forest dig have always been available for public scrutiny.
The "good news" and "damage control" machinery has been working overtime to extricate culpable functionaries, deceivers and corridor creepers from the proverbial poo.
Let's review what we know so far and closely analyse the logic behind explanations proffered by officialdom. 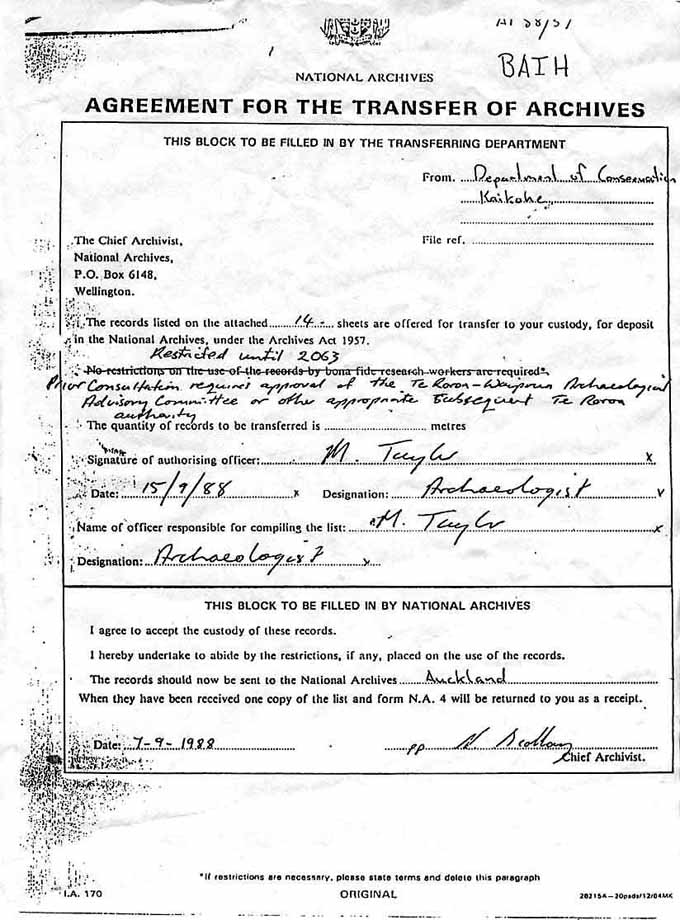 Figure 1: The much discussed "Embargo" document signed by Archaeologist, Michael Taylor and accompanying 14 pages of "something", which neither the general public nor bona fide research workers were permitted to view until the year 2063. The document states, in the handwriting of Michael Taylor, that 'Prior consultation requires approval of the Te Roroa- Waipoua Advisory Committee or other appropriate subsequent Te Roroa authority'. The printed line, which would allow bona fide research workers access to the information has been crossed out and overwritten with, 'restricted until 2063'. The overall intent of this document, as the covering-page for a body of archaeological information deemed "top secret", could not be clearer.

This document is very clearly imposing a restriction on certain information related to the extensive and very expensive archaeological excavations conducted in the Waipoua Forest between the late nineteen-seventies until the late nineteen-eighties. Despite the fact that public money funded the entire archaeological probe, certain information was categorised as not appropriate for general consumption or scrutiny and was to be locked away until a time when all contemporary adult members of the public were long dead and buried...why?
We must, therefore, contemplate the possible reasons for such a degree of secrecy, "tailored" to span nearly four generations.

Did the archaeologists happen upon something of a profound military nature in the Waipoua Forest, the significance of which was so vital to New Zealand's national security that it needed to be enshrouded under the "State Secrets Act"?...hardly likely.

How could 2000 ancient, stacked stone structures pose a threat to national security?

Was the archaeological information derived from the dig somehow threatening to the Maori claim of being the original inhabitants of New Zealand (the Tangata Whenua) and restricted on the basis that any devolution of such knowledge was disadvantageous to Maori claims of sovereignty?...highly likely.

What caused Ned Nathan, head of the Te Roroa Archaeological Advisory Committee to exclaim, within earshot of witnesses, 'that's 500 years before we got here!'? He is reported to have done this while looking at pages listing the "carbon dating" results.

In 1996 researcher, Gary Cook tried without success to get a copy of the archaeological report covering the 70's-80's dig. In the end Gary had to acquire the services of a lawyer, who made submissions to the Ombudsman to force the lifting of the illegal embargo. To my knowledge, the restrictions would have remained in place until 2063 were the legalities not challenged, under law, through an incentive instigated by Gary Cook.
But what % of the massive amount of documentation, relating to years of archaeological endeavour, was to be restricted until 2063? Was it solely 14 pages of material or was it intended to be anything and everything from the archaeological probe? A letter from the National Archives has, inadvertently, provided us with a clue, which helps answer this question. 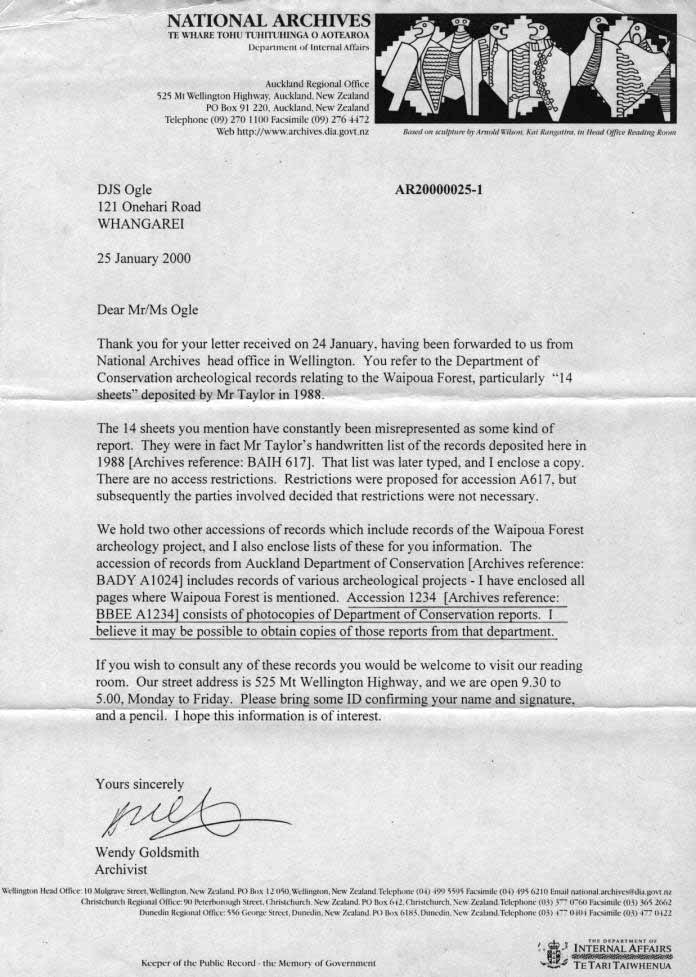 Figure 2: A letter, which has become the stock standard response from the National Archives, sent to those enquiring about the "14 pages" of embargoed material.

The Archives, in the above letter, state:

'The 14 sheets you mention have constantly been misrepresented as some kind of report. They were in fact Mr. Taylor's handwritten list of records deposited here in 1988 (Archive reference: BAIH617). That list was later typed, and I enclose a copy. There are no access restrictions. Restrictions were proposed for accession A617, but subsequently the parties involved decided that restrictions were not necessary'.

The admission, therefore, is that a restriction was proposed for A617, which, by appearance, embargoed all recorded entries found within the Waipoua Archaeological Project- Field Notebooks (containing archaeological findings and notations from 1979 to 1988) .

What can we realistically surmise from this?

I know of several researchers, including Noel Hilliam, Curator of the Dargaville Maritime Museum and Joan Leaf, Hokianga based Historian, who had no success in accessing the Waipoua Forest Archaeological report prior to Gary Cook's legal intervention. Both Noel and Joan complained about the lack of access to the information in a Radio Pacific interview, Friday, 21st of June 1996 (midday - 2pm).

Others have joined the fray, nudging and cajoling the authorities into proffering explanations, after all...what's so threatening about archaeological finds that they need to be dubbed "restricted"...
One tenacious bloodhound has been a gentleman in Taupo, who managed to solicit this response from The Hon. Mark Burton, M.P. for Taupo. Mr. Burton consulted with the Minister of Conservation, The Hon. Sandra Lee, as well as the Minister in charge of Archives, The Hon. Marian Hobbs. 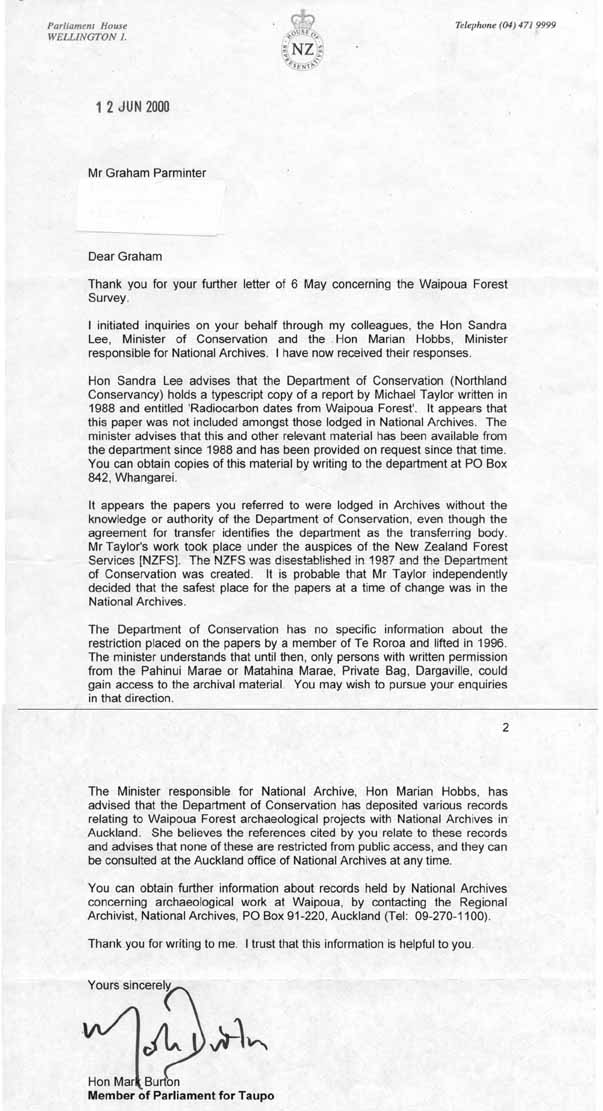 Well, from no disclosures earlier on (or outright denials that there ever was an embargo), it seems we were correct all along and, yes there definitely was some kind of access denial imposed by Pahinui Marae or Matahina Marae.

Despite appeasing, gloss over and confusing "double talk" in there, which attempts to minimize the gravity of the situation, we're getting closer to something that almost smacks of a disclosure.
Thanks Mark (we'll vote you in again next time). Thank you also Sandra and Marian for almost telling us something...mind you, we're mostly interested in the past tense aspect rather than how wonderfully accessible everything might appear to be in the present tense.

Then there's this letter from The Hon. Phillida Bunkle, which goes slightly further: 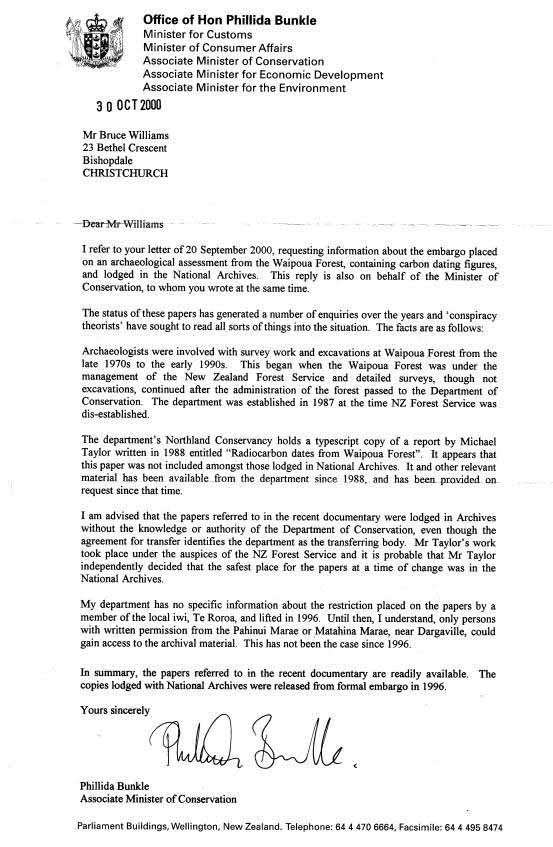 Figure 4: The Hon. Phillida Bunkle's response, which acknowledges that there was a restriction placed upon accessing Waipoua Forest archaeological information, formally suspended in 1996. In reality, this is the admission we have sought all along.

The authorities will be pleased to learn that those of us "crying foul" concerning their imposed secrecy of archaeological findings have had our fair share of critics. Members of the public have rolled over compliantly at the cosy, red herring explanations proffered by culpable functionaries, then come back at us for making a mountain out of a molehill.
The reality is that a huge body of historical information was earmarked for suppression and successfully hidden away for 8 years. It would have remained so unless someone was prepared to take up the cudgels and fight for the right to have it where it rightly belongs...in the public domain.

Archaeologists were employed by the New Zealand taxpayer to provide a service in behalf of the public. In the interests of scholarship and advancing our understandings of true regional history, it was our expectation to receive back a fully detailed appraisal of findings. We were not interested in personal political agendas or what would be most historically convenient for minority factions...just the "warts and all", unadulterated truth. What we got back for our heavy outlay of funds was suppression, evasion, deception, and what Justice Mahon would have referred to as, 'a litany of lies'.

The reason for suppressing this information is that, clearly, the 2000 stacked stone structures on 600 sites, throughout five archaeologically designated sections, on both sides of the Waipoua River and scattered over 500 acres of terrain, ARE NOT OF POLYNESIAN MAORI ORIGIN.
The general public would be very naïve to accept that the suppression order has been fully lifted, as the significance of the site continues to be played down and everyone is dissuaded from going to visit the structures of the pre-Maori "Stone People".

The Waipoua Forest sites are still on public land, administered by the Department of Conservation and it is the right of all New Zealanders to hike throughout the area, with no known legal restriction posted by the Archaeological Division of DOC.

Despite this, visitors to the area, wishing to visit the ruins, are oftimes followed by carloads of locals who threaten them with violence if they don't leave the area. Other's, returning to their vehicles after visiting the ruins, find threatening notes left by the self-proclaimed owners. One recent note (3rd of July 2001) stated:

Martin,
On Tuesday the 3rd of July, myself, a friend and 3 boys ranging in age from 7 ½ to 17 years, ventured into the Waipoua forest for a bush walk and a look at the ancient stone structures therein.
We were dismayed to find that large areas of pines surrounding this site had recently been felled. Pine trees, which should never have been planted on this historical site are now harvestable.

These ancient structures, which have survived many centuries, may now have an existence numbered in days.
It is disheartening to see these artifacts, due to be destroyed, the people and their children who lived and died there could be ancient kin to many of us.

Around about 2:30pm we returned to our vehicle to find this threatening note tucked under a window wiper.

Free ranging domestic cattle, presumably owned by the Nathan's, have done irreparable damage to the stacked stone structures, by clambering over and around them. In many respects, it would have been far better if the 70's to 80's archaeological dig had been postponed until a more enlightened age, when the newly re-exposed structures were valued, respected and protected.

The Waipoua Forest suppression of information is but one of many attempts to dupe the New Zealand public and rob them of their true historical inheritance.

Mounds of secret information, from many regions of New Zealand, remain under lock and key. Let's name a few items we'd like to see brought out into the light of day...If anyone, with specific information about a New Zealand archaeological "cover-up", would like to write in, we'll add your information or enquiry to the following thread:

Updated information: These two pre-colonial, European female skeletons were moved a short distance, amounting to only a couple of hundred yards, to the "pauper's section" of the Dargaville cemetary. There are approximately 50 bodies buried in that section and it would now, in all probability, be impossible to know which two skeletons were those of the pre-colonial European women. The discovery and reburial occurred in 1902. The two bodies were examined by Dr. Rata Norton who had worked in the district since 1872..ref. Noel Hilliam, Dargaville Maritime Museum Curator.

The New Zealand archaeological scene is changing rapidly with the emergence of dynamic new information, much of which is astronomical in nature. Local structures also incorporate Northern Hemisphere geodetic, "ring of the Earth" navigational systems and Egyptian/ Indo European measurement standards.
Self-protective, politically orientated and insulated New Zealand archaeologists or social historians are destined, shortly, to become yesterday's forgotten dinosaurs and fossils. Likewise, factions within Maoridom will be seen to have been deliberately obstructive, deceptive and self-aggrandizing, in excluding any history that did not promote, solely, their people or present political stances.